Casablanca is a well known cosmopolitan and hospitable metropolis that millions of people from all over the world fly over when travelling from one continent to the next or come to discover as tourists every year. Casablanca is also a territory that is dominated by its economic activity and its port, which has been a driving force in Morocco for several centuries, and which is now positioning itself as an investment hub for the African continent. Lastly, Casablanca is also characterized by an idea, one of freedom and struggle, partly and elegantly brought on by a mythical movie which has had a fascinating footprint and marked film history.

In light of this, and to support the project which consists in transforming the metropolis into the new economic, cultural and tourism flagship in Africa, the city of Casablanca has entrusted the local development company, Casablanca Events & Animations , with the mission of initiating a territorial marketing approach.

is to highlight all of its attributes to investors, visitors and international students, and naturally to the people of Casablanca as well, in order to structure and coordinate the many promotional actions under one banner. The objective is to make the territory more audible, easily identifiable and more attractive on the economic, tourism and domestic levels.

Casablanca Events & Animationshas chosen to focus on a global brand to enhance the attractiveness, hospitality and proximity of the metropolis, as well as to rally all the efforts to this end under one banner, that is easily identifiable and effortlessly endorsed.

The brand was built gradually after an in-depth diagnosis of the city’s assets, its characteristics and its identity, on the basis of a sensitive, psychological profile and following an image assessment conducted by associating hundreds of people from Casablanca, using a participatory approach. Residents of neighborhoods, researchers, entrepreneurs, actors in tourism, and members of the diaspora all participated in the inception of this beautiful project. 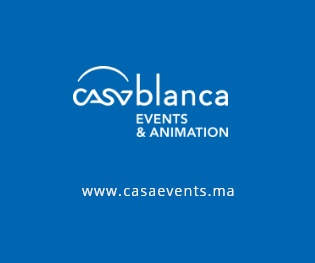 WECASABLANCA thus became the banner that supports the city’s 2015-2020 strategy centered on the living conditions of urban residents, mobility, economic attractiveness and the business climate. The rehabilitation and upgrading of entertainment and leisure infrastructure, the development of tourist projects on the coast, the upgrading and modernizing of equipment in under-equipped areas, the improvement of mobility and of means of public transportation as well as the construction of new public facilities.

Ultimately,WECASABLANCA has a vision, that of a territory marked in its DNA by a young, active, connected, multicultural population, open to the sea and to others.